Food companies are making diversity, equity, and inclusion (DEI) a priority, according to the second report in the Future of Work series from Deloitte and FMI-The Food Industry Association.

Two-thirds of food industry leaders believe their companies are successfully promoting DEI ideas, and 70% believe their DEI efforts are improving the work environment for their employees. To help them move forward on such initiatives, 67% of food companies have set measurable goals and implementation timeframes.

But are they moving quickly enough? Deloitte and FMI analyzed data from 150 survey responses and 15 interviews with food industry executives, as well as this year’s Missing Pieces Report, to find out how DEI plans are taking shape in the industry.

Prioritizing training at all levels

Finding and keeping workers has been an ongoing struggle for food industry companies, one they listed as a primary challenge in the first part of the Future of Work series. To prepare themselves, companies said they’re taking actions such as redesigning the workplace (49%), investing in retraining/reskilling (47%), and adapting work for new tech (45%).

But, coming in at the top of the list, 68% of food industry companies have provided diversity and inclusion training to their employees to help tackle talent acquisition struggles. Barb Renner, vice chair and US Consumer Products Leader at Deloitte, says companies are employing many types of training that cover all levels of employees.

“The critical thing is that the broad majority of both product suppliers and food retailers recognized that it is this type of training investment that will best prepare them for the workforce challenges of the future,” she says. “It’s more important than automation and robotics, more important than process software or any number of things we also asked them about.”

Despite talent acquisition and retention being their top challenge, Renner says 57% of food companies believed their talent program was their most successful tool for building a diverse workforce. “And they think their broader portfolio DEI efforts are largely working.”

This focus on DEI also showed up in survey responses related to developing senior leadership teams. The majority of companies (86%) said their top priority in this area was to advance progress on their DEI goals.

But food companies have a lot of work ahead of them. Most food industry suppliers acknowledged that their leadership composition is not representative of the larger company population — only 30% said it’s sufficiently represented.

And although board representation for women and other historically marginalized groups improved 4% and reached 35% between 2018 and 2020, the food industry still lags behind the nonfood consumer staples segment, which improved 11% to reach 47% diversity during the same period.

For companies struggling to turn their DEI goals into realities, here are a few insights from surveyed executives:

Looking beyond the workforce

It’s clear that the majority of food industry companies want to gain ground in their DEI goals, especially to support hiring and retention. And they recognize the importance of creating a welcoming workplace culture that offers equal opportunities to all employees.

But the impact doesn’t end with employees. “Food retailers and product suppliers that embrace, not just diversity, but actual equity as an imperative aren’t just going to change their workforces,” Renner says. “They are also going to change their marketplaces and the communities in which they exist.”

And customers are watching for DEI progress. They can tell whether companies are all talk or are actively making positive change, and they’ll direct their business toward companies that prove to be part of the solution.

“DEI is not only the right thing to do,” Renner says, “but a competitive advantage.”

There’s a Smarter Way to Approach the Labor Shortage 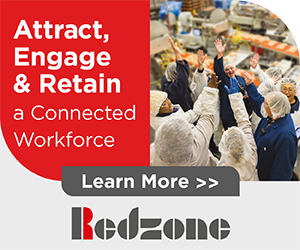